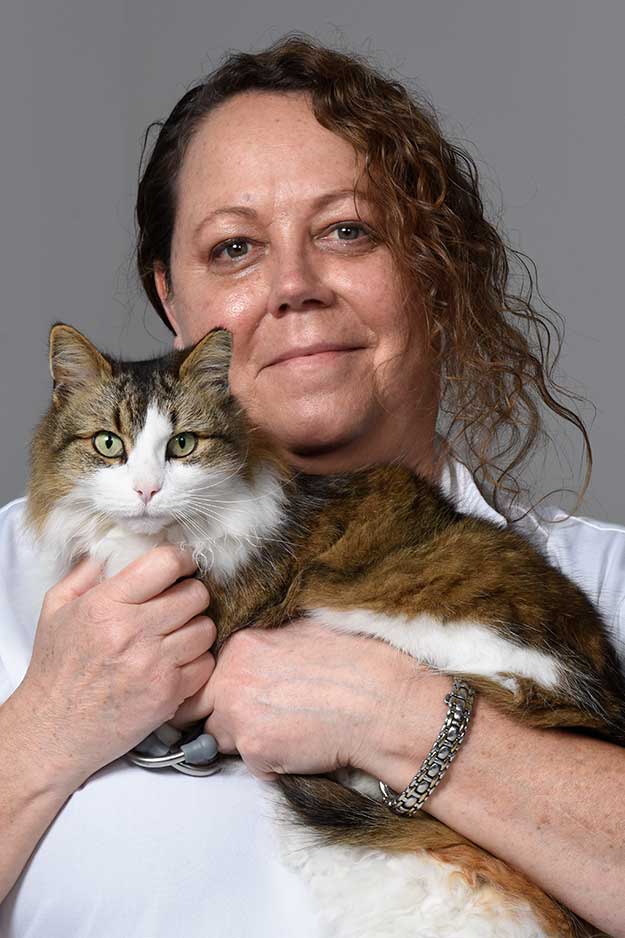 Dr. Behrens grew up in Walworth, Wisconsin, as an only child with her dog and cats acting as her brothers and sisters. Then at age 12, after the death of her dog and her interactions with the family’s veterinarian, she realized how much she truly wanted to devote her life to help the pets and the people who care for them so deeply. Dr. Behrens has seen and truly enjoys the bond that is shared between people and their pets and feels fortunate to play a small part in that amazing relationship.

Dr. Behrens is a pet owner as well and has a mixed-breed dog named Eli, a Pit Bull named Clyde, and a cat named Hitch. Dr. Behrens hopes that she and her Pit Bull-owner/clients can show that these dogs can be great pets when owned by responsible people.

She is also embarrassed that as a vet she has absolutely no idea what breed Eli is! She does, however, call him her little Dingo, since this is what he resembles most.

Beyond her veterinary work and caring for her pets, Dr. Behrens likes to hike and generally be in the great outdoors. She also is the proud owner of a Harley Davidson motorcycle and enjoys the wind in her face, the freedom of the open road and sharing the love of the rumble with those from all walks of life.

Once you and your pet walk through our door, you become part of our family.

The veterinarians and staff at Animal Hospital Randolph are dedicated to promoting responsible pet ownership.

What Makes Us Different

We believe that client education is the first and most important step toward promoting excellent pet health.

We are at the forefront of providing comprehensive care specifically designed to meet your pet's unique needs.