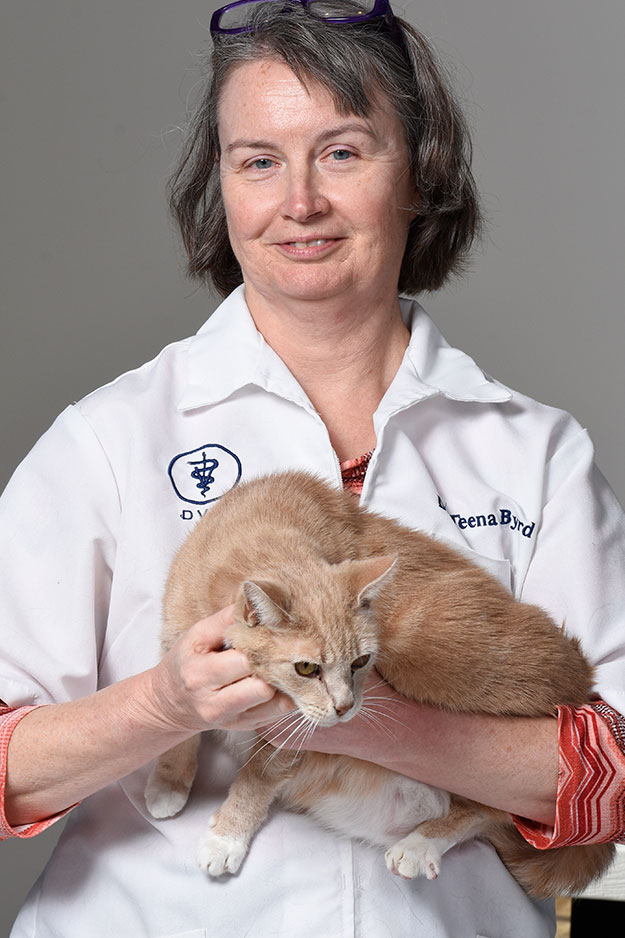 Her areas of particular interest are behavior, internal medicine and dentistry.

Dr. Byrd’s early years were spent in Ohio where her family lived in Cincinnati and then moved to Columbus and from there to Urbana. Then at age 14, her family moved to East Tennessee where she lived during her high school and college years.

It was during her childhood growing up with a number of dogs and cats that Dr. Byrd developed her love of animals. She enjoyed playing and interacting with them and decided at a young age that she wanted to have a job helping care for animals. As a veterinarian, Dr. Byrd says that she thoroughly enjoys the sciences and the ever-changing knowledge she is able to acquire the longer that she practices. This career can never get stale, she says, because there is so much to learn.

Perhaps, though, what keeps her work from becoming stale more than anything else is experiencing the moment when a happy and well pet is reunited with its previously worried and anxious, but now relieved owner.

Dr. Byrd has served as a member of the Randolph County Board of Health since 2002 and has been chairman since 2007. She has lectured on behavior topics for the Canine Corps and is a Humane Society of Randolph County foster parent.

Once you and your pet walk through our door, you become part of our family.

The veterinarians and staff at Animal Hospital Randolph are dedicated to promoting responsible pet ownership.

What Makes Us Different

We believe that client education is the first and most important step toward promoting excellent pet health.

We are at the forefront of providing comprehensive care specifically designed to meet your pet's unique needs.